#These authors contributed equally to this work.

This is an Open Access article distributed under the terms of the Creative Commons Attribution Non-Commercial License, which permits unrestricted non-commercial use, distribution, and reproduction in any medium, provided the original work is properly cited.

The increased expression of receptors for advanced glycation end-product (RAGE) is known as a key player in the progression of vascular remodeling. However, the precise signal pathways regulating RAGE expression in vascular smooth muscle cells (VSMCs) in the injured vasculatures are unclear. Given the importance of mitogen-activated protein kinase (MAPK) signaling in cell proliferation, we investigated the importance of MAPK signaling in high-mobility group box 1 (HMGB1)-induced RAGE expression in VSMCs. In HMGB1 (100 ng/ml)-stimulated human VSMCs, the expression of RAGE mRNA and protein was increased in association with an increase in AGE-induced VSMC proliferation. The HMGB1-induced RAGE expression was attenuated in cells pretreated with inhibitors for ERK (PD98059, 10 μM) and p38 MAPK (SB203580, 10 μM) as well as in cells deficient in ERK and p38 MAPK using siRNAs, but not in cells deficient of JNK signaling. In cells stimulated with HMGB1, the phosphorylation of ERK, JNK, and p38 MAPK was increased. This increase in ERK and p38 MAPK phosphorylation was inhibited by p38 MAPK and ERK inhibitors, respectively, but not by JNK inhibitor. Moreover, AGE-induced VSMC proliferation in HMGB1-stimulated cells was attenuated in cells treated with ERK and p38 MAPK inhibitors. Taken together, our results indicate that ERK and p38 MAPK signaling are involved in RAGE expression in HMGB1-stimulated VSMCs. Thus, the ERK/p38 MAPK-RAGE signaling axis in VSMCs was suggested as a potential therapeutic target for vascular remodeling in the injured vasculatures.

Vascular injury initiates infiltration of inflammatory cells into damaged tissues, and causes subsequent release of endogenous damage-associated molecular patterns (DAMPs) including high-mobility group box 1 (HMGB1) [1]. HMGB1 released from activated immune cells or necrotic cells functions as an important inflammatory mediator when present extracellularly [2]. In atherosclerotic plaque, the level of HMGB1 was increased and suggested to be involved in vascular remodeling the potentiation of inflammatory processes [3,4]. Recent evidences have also indicated that HMGB1 was suggested as a key player in the process of vascular remodeling in the injured vasculatures [5]. Although vascular smooth muscle cells (VSMCs) have been identified as a major source of HMGB1 in atherosclerotic lesions [1,6,7], the precise role played by VSMCs in vascular remodeling in the injured vasculatures is unclear.

When cells are exposed to physical and chemical stresses, the nuclear HMGB1 is translocated outside the cells and then extracellular HMGB1 binds directly to various cell membrane pattern recognition receptors including TLR2, TLR4 and receptors for advanced glycation end-product (RAGE) which were consistently expressed in VSMCs [8-10]. In previous studies, the expression of RAGE in VSMCs at the sites of vascular injury was markedly upregulated compared to that in normal healthy vessels [7,11], thereby enhancing AGE-induced VSMC proliferation [12]. Thus, HMGB1-RAGE interaction has been recognized as a key process involved in the development of vascular remodeling disease [11,13].

RAGE expression is upregulated in the lesion of vascular injury [20] and the increased RAGE expression in VSMCs was indicated as an important player in the development of proliferative vascular diseases [21]. Although the importance of AGE-RAGE interaction in the injured vasculatures has been well established in vascular remodeling [22,23], the intracellular signaling mediating VSMC proliferation remain unclear. Given the importance of mitogen-activated protein kinase (MAPK) signaling in the development of vascular remodeling in the injured vasculatures, the role of MAPK signaling in RAGE expression and AGE-induced cell proliferation in HMGB1-stimulated VSMCs were investigated in this study in order to develop effective therapeutic strategies for vascular remodeling.

hVSMC proliferation rates were determined by using an MTT assay. In brief, hVSMCs (1 × 105 cells) were treated with a MTT working solution (EZ-Cytox; Daeil Laboratories, Seoul, Korea), and then incubated in a humidified atmosphere containing 5% CO2/95% air for 1 h at 37°C. For ELIZA analysis, the absorbance value of the solution was obtained at a wavelength of 450 nm. Relative proliferation rates were determined by comparing cells with control.

hVSMC lysates were prepared in an ice-cold lysis buffer (Thermo Fisher Scientific, Waltham, MA, USA). Equal amounts of protein were separated on 8%–10% sodium dodecyl sulfate-polyacrylamide gels and then transferred to nitrocellulose membranes (Amersham-Pharmacia Biotech, Piscataway, NJ, USA). Membranes were blocked with 5% skim milk in Tris buffered saline with Tween-20 (TBST) at room temperature for 2 h and then incubated overnight with primary antibody at 4°C. Following this, membranes were washed with TBST, incubated with horseradish peroxidase-conjugated secondary antibody for 2 h at room temperature and then chemiluminescence intensities were measured using image capturing software (Amersham, Imager 680 version. 2.0). Membranes were re-blotted using anti-β-Actin antibody as an internal control. Signals from bands were quantified using the UN-SCAN-IT GEL 7.1 program and data were expressed as relative β-Actin densities.

siRNA for p44/42 MAPK (ERK1/2) (Cat # 6560), SAPK/JNK (Cat # 6232) and p38 MAPK (Cat # 6564) were purchased from Cell Signaling Technology. The siRNA negative control duplex was used as a control oligonucleotide. For siRNA transfection, hVSMCs were seeded and then transfected with MAPKs siRNA using Lipofectamine 2000 reagent (Invitrogen) according to the manufacturer’s protocol.

Results were expressed as the means ± standard error of the means (SEMs). One-way analysis of variance (ANOVA) followed by Dunnett multiple comparison test was performed. Student’s t-test was used to determine significant differences between two groups. Statistical significance was accepted for pvalues < 0.05.

Characteristics of RAGE expression in hVSMCs stimulated with HMGB1 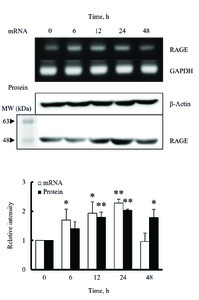 Figure 1. Effects of HMGB1 on RAGE expression in hVSMCs. The cultured hVSMCs were stimulated with HMGB1 (100 ng/ml) for 0 to 48 h, and then the expression of RAGE mRNA and protein was determined by using RT-PCR and Western blot, respectively. GAPDH and β-Actin were used as internal controls. Blots are representative of 5 independent experiments. Bottom: Relative intensities were quantified and expressed as the means ± SEMs of 5 independent experiments. HMGB1, high-mobility group box 1; RAGE, receptors for advanced glycation end-product; hVSMCs, human vascular smooth muscle cells; MW, molecular weight. *p < 0.05, **p < 0.01 corresponding value at 0 h.

Functional role of HMGB1-induced RAGE in hVSMC proliferation by AGE

To increase RAGE expression in VSMCs, hVSMCs were treated with HMGB1 (100 ng/ml) for 24 h. Cell proliferation was induced by AGE and then measured using an MTT assay. As shown in Fig. 2, AGE (30 μg/ml)-induced cell proliferation was markedly increased in VSMCs stimulated with HMGB1 (100 ng/ml) compared to vehicle-treated cells. The inhibitory effects of anti-RAGE antibody on the AGE-induced proliferation in HMGB1-treated cells was more prominent than that in vehicle group. Thus, the RAGE signaling upregulated by HMGB1 was suggested as a key player in VSMC proliferation in the injured vasculatures. 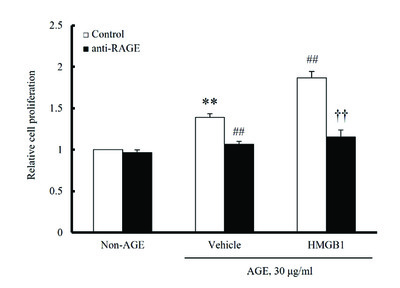 Figure 3. Characteristics of ERK, JNK, and p38 MAPK phosphorylation in HMGB1-stimulated hVSMCs. hVSMCs were stimulated with HMGB1 (100 ng/ml) for 0 to 24 h, and then the levels of phosphorylated and total ERK (A), JNK (B), and p38 MAPK (C) were determined by Western blotting. Blots are representative of 3–4 independent experiments. Bottom: Relative intensities of phosphorylated to total ERK, JNK, and p38 MAPK were quantified and expressed as the means ± SEMs of 3–4 independent experiments. MAPK, mitogen-activated protein kinase; HMGB1, high-mobility group box 1; hVSMCs, human vascular smooth muscle cells. *p < 0.05, **p < 0.01 value in 0 h. 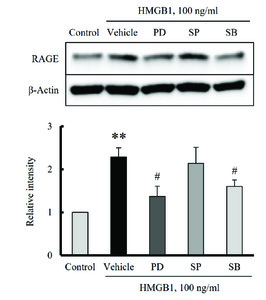 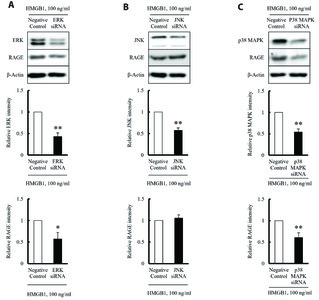 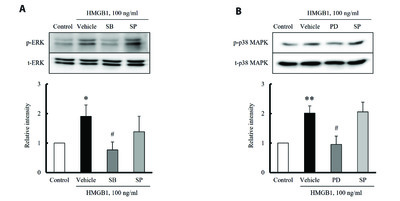 To further confirm whether ERK and p38 MAPK signalings are involved in the augmented proliferative effects of HMGB1 on AGE-stimulated hVSMCs, cells were treated with HMGB1 (100 ng/ml) for 24 h, and then cell proliferation was induced by AGE. In hVSMCs stimulated with HMGB1, AGE-induced cell proliferation was markedly increased, which was attenuated in cells pretreated with PD98059 (10 μM), an ERK inhibitor and SB203580 (10 μM), a p38 MAPK inhibitor, but not by a JNK inhibitor (Fig. 7). These results suggested a pivotal role of ERK and p38 MAPK signaling in regulating RAGE expression and subsequent VSMC proliferation induced by AGE. 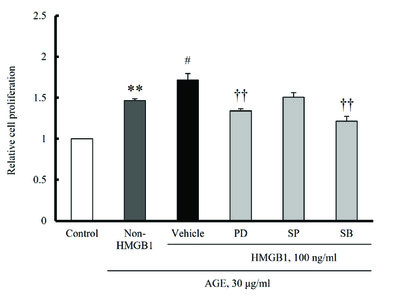 The salient findings of this study are that the expression of RAGE mRNA and protein was increased in human VSMCs stimulated with HMGB1, which was accompanied by an augmented cell proliferation induced by AGE. Both HMGB1-induced RAGE expression and HMGB1-augmented effects of AGE-induced VSMC proliferation were markedly attenuated by inhibition of ERK and p38 MAPK signaling, suggesting a potential involvement of the ERK/p38 MAPK-RAGE signaling axis in vascular remodeling in the injured vasculatures.

Vascular injury-induced infiltration of inflammatory cells into damaged tissues is followed by an increased production of endogenous DAMPs including HMGB1, a best characterized and pivotal DAMPs released into the injured vasculatures [1]. In atherosclerotic lesions, VSMCs, macrophage, and endothelial cells were identified as major sources of HMGB1 production [1,6,7]. The increased HMGB1 in atherosclerotic plaque is known to be involved in vascular remodeling the potentiation of inflammatory processes [3,4]. Recent evidences have also indicated that HMGB1 released from the injured vasculatures was suggested as a key player mediating vascular remodeling [5]. Although VSMCs have been identified as a major vascular source of HMGB1 in atherosclerotic lesions [1,6,7], the precise role of HMGB1 on VSMC proliferation remains unidentified.

HMGB1 primarily resides in the nucleus of quiescent cells [24], and its release is increased when cells are activated in the injured tissues [1,6]. When cells are exposed to physical and chemical stresses, nuclear HMGB1 can be translocated to cytosol and then released outside the cells active and passive pathways, and the extracellular HMGB1 may bind to cell surface receptors [8,9]. Among various cell membrane pattern recognition receptors, TLR2, TLR4, and RAGE were consistently expressed in VSMCs in our previous study [10]. In diabetes, the increasing evidence shows that RAGE is recognized as an important molecule involved in the development of vascular remodeling disease [13]. Also, the expression of RAGE in VSMCs at the sites of vascular injury was markedly upregulated compared to that in normal healthy vessels [7,11], thereby enhancing AGE-induced VSMC proliferation [12]. To investigate the mechanisms involved in HMGB1-mediated vascular remodeling, we investigated the regulatory effects of HMGB1 on the expression of RAGE in human VSMCs. In the present study, stimulation of VSMCs with HMGB1 increased RAGE expression, which was accompanied by an augment in AGE-induced cell proliferation. Thus, the HMGB1-RAGE signaling in hVSMCs was suggested as a pivotal pathway involved in vascular remodeling in the injured vasculature.

Taken together, the results of our present study show that the activation of ERK and p38 MAPK signaling mediates RAGE expression in HMGB1-stimulated hVSMCs, which augments proliferation of human VSMC induced by AGE. Considering the importance of the phenotypic modulation of VSMCs in vascular remodeling, the HMGB1-ERK/p38 MAPK-RAGE signaling axis in VSMCs was suggested as a potential therapeutic target for vascular remodeling in the injured vasculatures.

This study was supported by a 2-Year Research Grant of Pusan National University, Republic of Korea.