This is an Open Access journal distributed under the terms of the Creative Commons Attribution Non-Commercial License (http://creativecommons.org/licenses/by-nc/4.0) which permits unrestricted non-commercial use, distribution, and reproduction in any medium, provided the original work is properly cited.

Phosphorylation levels of glycogen synthase kinase 3β (GSK3β) negatively correlated with psychomotor stimulant-induced locomotor activity. Locomotor sensitization induced by psychomotor stimulants was previously shown to selectively accompany the decrease of GSK3β phosphorylation in the nucleus accumbens (NAcc) core, suggesting that intact GSK3β activity in this region is necessary for psychomotor stimulants to produce locomotor sensitization. Similarly, GSK3β in the NAcc was also implicated in mediating the conditioned effects formed by the associations of psychomotor stimulants. However, it remains undetermined whether GSK3β plays a differential role in the two sub-regions (core and shell) of the NAcc in the expression of drug-conditioned behaviors. In the present study, we found that GSK3β phosphorylation was significantly lower in the NAcc shell obtained from rats expressing amphetamine (AMPH)-induced conditioned locomotor activity. Further, we demonstrated that these effects were normalized by treatment with lithium chloride, a GSK3β inhibitor. These results suggest that the behavior produced by AMPH itself and a conditioned behavior formed by associations with AMPH are differentially mediated by the two sub-regions of the NAcc.

In addition to sensitization, another important feature of drugs of abuse contributing to the development of craving and consequent relapse is their ability to confer rewarding effects to the environment associated with them [18-21]. Similar to its role in locomotor sensitization, GSK3β has also been implicated in mediating conditioned rewards formed by associations of psychomotor stimulants and the place that they were given [22-25]. For example, it was shown that the developments of conditioned place preference induced by cocaine and AMPH was prevented by GSK3β inhibitors in mice [22] and rats [24], respectively. However, although the NAcc is known as one of the critical neuronal substrates mediating conditioned behaviors [26,27], it remains undetermined which sub-region of the NAcc GSK3β contributes to mediating conditioned behaviors. Thus, in the present study, we measured the GSK3β phosphorylation levels separately in two sub-regions of the NAcc following the expression of AMPH-induced conditioned locomotor activity. Further, we examined whether conditioned behavior and the accompanying changes in GSK3β phosphorylation recovered following treatment with a GSK3β inhibitor.

Male Sprague–Dawley rats (6 weeks old) weighing 220–250 g on arrival were obtained from Orient Bio Inc. (Seongnam, Korea). They were housed three per cage in a 12-h light/dark cycle room (lights out at 8:00 pm), and all experiments were conducted during the day. Rats had access to water and food at all times. All animal use procedures were conducted according to an approved Institutional Animal Care and Use Committee protocol (approval number: 09-140) of Yonsei University College of Medicine.

Locomotor activity was measured using a bank of 9 activity boxes (35 × 25 × 40 cm) (IWOO Scientific Corporation, Seoul, Korea) made of translucent Plexiglas. Each box was individually housed in a PVC plastic sound attenuating cubicle. The floor of each box consisted of 21 stainless steel rods (5 mm diameter), spaced 1.2 cm apart, center-to-center. Two infrared light photo beams (Med Associates, St. Albans, VT, USA) were positioned 4.5 cm above the floor and spaced evenly along the longitudinal axis of the box, to estimate horizontal locomotion. A single locomotor activity was only considered to be legitimate when a rat interrupted two beams consecutively, so as to avoid any possible confounding activities, such as grooming in a spot covering just a single beam.

Upon arrival, all rats passed a week-long adaptation period to the new housing environment before conducting any experiments.

In Experiment 1, rats were randomly assigned to three groups: Paired, Unpaired, and Control. During conditioning, rats in these three groups were administered injections in five 2-day blocks. Rats received intraperitoneal injection (IP) of AMPH (1 mg/kg) in locomotor activity boxes on day 1 and saline in their home cages on day 2 (Paired), saline in the activity boxes on day 1 and AMPH in their home cages on day 2 (Unpaired), or saline in both environments (Control). This procedure that we used here has previously been shown to produce conditioned locomotor activity [27,28]. On the test, one week after the last conditioning block, all rats were tested for their conditioned locomotor response in the activity boxes for one hour following an IP saline injection.

In Experiment 2, rats were randomly assigned to three groups: Paired, Unpaired, and Control, as defined in Experiment 1. They followed the same procedure as described in Experiment 1 for the development of conditioning. On the test, one week after the last conditioning block, each group of rats were sub-divided into two. Then, they were tested for their conditioned locomotor response in the activity boxes for one hour following an IP saline or lithium chloride (50 mg/kg) injection.

An entire experimental scheme is depicted (Fig. 1A) and a summary table, indicating each group’s different pairings between drugs and environments, is shown (Fig. 1B). 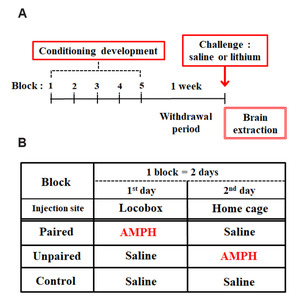 Figure 1. Experiment outline. (A) An experimental timeline indicates a conditioning development schedule and the point at which challenge and brain extraction were performed. (B) A table summarizes three groups showing where they received AMPH and saline. AMPH, amphetamine.

Immediately after completion of behavioral experiments, rats were decapitated by guillotine. Brains were rapidly removed and coronal sections (1.0 mm thick extending 1.60–2.60 mm from bregma) were obtained with an ice-cold brain slicer (Model SA-2160; Roboz Surgical Instrument Co., Gaithersburg, MD, USA). The NAcc core (circular punch with 1.0 mm diameter) and the shell (rectangular shape cut) regions were obtained on an ice-cold plate. Tissues were all immediately frozen on dry ice and stored at –80°C. They were prepared bilaterally and pooled for each individual animal’s protein isolation.

One week after the last block of the conditioning development schedule, all rats were saline-challenged and locomotor activities were measured (Fig. 2). One-way ANOVA conducted on these data revealed a significant effect of pairing (F2,42 = 10.67, p < 0.001). As expected, rats paired with AMPH in the locomotor activity boxes (Paired) showed higher locomotor responses than those in the saline group (Control). Further, the Paired group also exhibited higher locomotor activities when compared to rats administered the same amount of AMPH in different environments (Unpaired) (p < 0.001 by Bonferroni comparison). 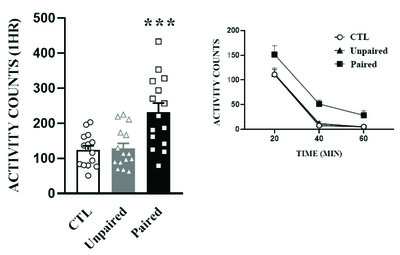 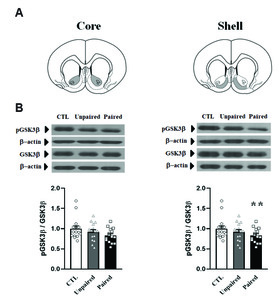 Figure 3. AMPH conditioning lowers GSK3β phosphorylation levels in the NAcc shell. (A) The core (circle) and the shell (rectangular), two sub-regions of the NAcc, are shown. Punches were prepared bilaterally and pooled for each individual animal’s protein isolation. Line drawing is from Paxinos and Watson [39] and depicts the caudal surface of a coronal section (1.0 mm thick) extending 1.70–2.70 mm from bregma. (B) Representative Western blots are shown. Values for the band intensities were first normalized to β-actin and then the average values for the ratio of phosphorylated to total proteins in each group were expressed as group mean + SEM. relative to Control group. Symbols indicate significant differences as revealed by Bonferroni comparisons following one-way ANOVA. **p < 0.01, significantly different compared to Control group. Numbers for each group are 15. AMPH, amphetamine; GSK3β, glycogen synthase kinase 3β; NAcc, nucleus accumbens. 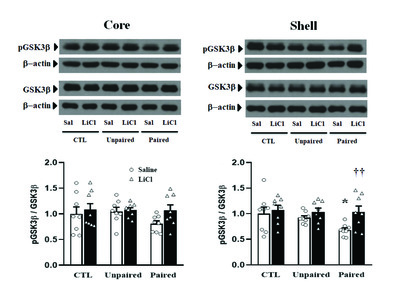 Figure 5. Lithium chloride recovers a reduction in GSK3β phosphorylation levels in the NAcc shell. Representative Western blots are shown. Values for the band intensities were first normalized to β-actin and then the average values for the ratio of phosphorylated to total proteins in each group were expressed as group mean + SEM relative to saline challenged Control group. Symbols indicate significant differences as revealed by Bonferroni comparisons following two-way ANOVA. *p < 0.05, significantly different compared to Control group. ††p < 0.01, significantly different from no lithium chloride treated the Paired group. Lithium chloride treatment also recovered the lowered GSK3β phosphorylation levels in the Paired group, but it did not reach statistical significance, in the NAcc core. Numbers for each group are 8. GSK3β, glycogen synthase kinase 3β; NAcc, nucleus accumbens; CTL, control; LiCl, lithium chloride.

It was previously shown that GSK3β phosphorylation in the NAcc was decreased when cocaine-associated contextual memory was reactivated [23], while knockdown of GSK3β in the NAcc attenuated the development of cocaine-induced place preference [25]. These results indicate that intact GSK3β activity in the NAcc is necessary for the development and expression of psychomotor stimulants-induced conditioned responses. Consistent with these results, we showed in the present results that GSK3β phosphorylation was lower in the NAcc following the expression of AMPH-induced conditioned locomotor activity. Furthermore, contrary to previous results that did not distinguish the role of GSK3β in the two sub-regions of the NAcc, we found that GSK3β phosphorylation was more significantly reduced in the shell than in the core (Fig. 3). It has been shown in the literature that the NAcc shell plays a more important role in the processing of contextual information than that of the core, and thereby contributes to the context-induced reinstatement of drugs of abuse [29-34]. The increased conditioned locomotor activity toward contextual stimuli associated with drugs of abuse, shown in our present results, can be considered as a manifestation of drug seeking behavior [35]. Accordingly, the finding that a significant decrease in GSK3β phosphorylation in the shell was only observed in the Paired but not in the Unpaired group, which received the same amount of AMPH in a different place, imply that they may reflect a specific role of GSK3β signaling in mediating conditioning effect of AMPH-associated environmental stimuli.

It was previously shown that the development of conditioned place preference induced by cocaine or AMPH was prevented by either systemic or intra-accumbal injection of a GSK3β inhibitor [22-24]. Consistent with these results, we showed that lithium chloride, a GSK3β inhibitor, completely abolished the expression of conditioned locomotor activity (Fig. 4). In addition, we also demonstrated that the decrease in GSK3β phosphorylation in a drug-associated conditioning model was normalized back to control level by lithium chloride treatment following behavioral recovery (Fig. 5). As lithium chloride is known to have the ability to increase the phosphorylation levels of Akt, an up-stream effector of GSK3β, and thereby its phosphorylation levels [36,37], our present findings suggest that GSK3β signaling in the NAcc shell may be under the general regulation of the well-known phosphatidylinositol 3-kinase (PI3 kinase) and Akt signaling pathways. Looking into downstream components, it is not yet known what signaling molecules are involved in the expression of AMPH-induced conditioned locomotor activity. Interestingly, in rats associated with AMPH, dendritic spine density was increased in the shell only in Paired rat [35]. Further, it was recently shown that ezrin-radixin-moesin (ERM) proteins, a group of proteins which play a role in cell-shape determination and spine maturation, are under the regulation of Akt-GSK3β signaling pathways [38], suggesting that there is a possibility for GSK3β to become involved in spine formation. Thus, it will be interesting to examine in the future how GSK3β is involved in these process to eventually contribute to the expression of AMPH-induced conditioned locomotion.

This work was supported by a grant from The Myung-Sun Kim Memorial Foundation.